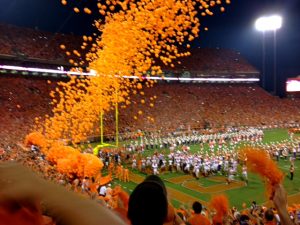 Securing the 2017 National Championship title for the Clemson Tigers looked like a distant dream after trailing 10 points going into the fourth quarter. That’s when Clemson’s quarterback, Deshaun Watson, began to dominate the Alabama defense, which had been considered among the greatest in college football history. Watson completed 12 of 18 passes for 130 yards, and added another 22 yards on the ground, capping off the victory with a 2-yard touchdown to Hunter Renfrow that put Clemson up with 1 second left on the clock.

Five coaches have led Clemson to 10 or more wins in a season. Four of them played football at Alabama: Swinney, Danny Ford, Charley Pell and Frank Howard. Though Clemson last won the national title in 1981, it wasn’t until coach Dabo Swinney’s fourth full season at the helm that the Tigers became a permanent presence among the nation’s top 10 teams.

In an era dominated by Alabama, Ohio State and Florida State, Clemson’s victory proved that with the right coach, a special talent like Watson, AND a strong, balanced team that believes in itself, a school can rise from the middle of college football’s pack to become a National Champion. Congratulations to the Tigers, Clemson University, the Alumni, students, fans, the City of Clemson and Pickens County.