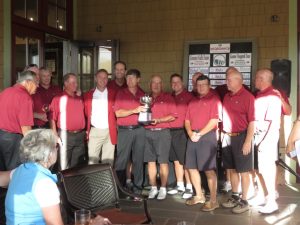 Tradition was broken this year at the 2016 Keowee Cup Golf Tournament with the Vineyards team emerging victorious with this year’s Lake Keowee Cup.

The golfers certainly enjoyed incredible weather this year, raising the standard to duplicate for the 2017 event when the tournament moves back to the inaugural home turf of The Vineyards. With 4 of the Vineyards players, (Randy Bertsch, Peter Rogers and Steve Steele and Justin Winter) going 3 and 0 in their matches, the Falls team will be polishing their game for next year’s friendly but fierce competition, when they’ll once again battle for the coveted title of Lake Keowee Cup Champions.