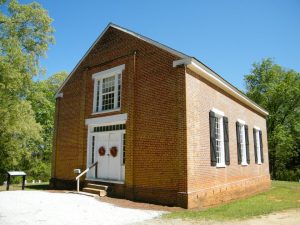 The Old Pickens Presbyterian Church was built around 1850 and is in excellent condition.  It serves as a wonderful example of mid-nineteenth century churches that were built in the “meeting-style”. The cemetery that is adjacent to the building has over 200 graves, many which date back to the Revolutionary War! Today, you can see this marvelous structure, which stands right off Highway 183 when you just cross into Oconee County from Pickens County. It is the only remaining building of the town known as Pickens Court House.
After the Revolutionary War, the Upstate was sparsely populated but as the area began to grown, county and boundary lines shifted to provide better access to local government for the residents. The town of Pickens Court House was established to be this seat of local government for all of the Pickens District. The townspeople built the church themselves with bricks made from the clay of the Keowee River. Even the floors are the original heart pine boards! In 1868, the South Carolina Constitutional Convention changed the term from “district” to “county” and divided the former Pickens District into what is now Pickens County and Oconee County. At that time, Pickens Court House was replaced but today’s city of Pickens as the place of local government.