There are many historical gems in the Upstate of South Carolina. One of these if the Old Stone Church in Clemson. Construction by John Rusk began at the end of the frontier period, around 1797 and although the threat of attacks by Native Americans was less likely at this point in time it is probable that this structure was designed with defense in mind. Completed in 1802, this stacked-stone building has continued to be a testament to this area for hundreds of years and is listed on the National Register of Historic Places. With windows the size of the doorways and high fenestration, the structure has an open feeling despite the large stone walls.
Buried within the cemetery, which predates the building of the Old Stone Church, are many notables including General Andrew Pickens who was also an elder of Old Stone Church. 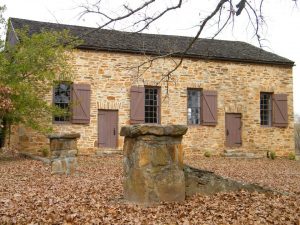