Like avocados are a good kind of fat, so there are also good kinds of snakes! And when we say good, we mean beneficial as well!  Did you know that a Black King snake can attack or even kill a Copperhead as well as pest animals?

Across South Carolina, we have over 38 species of native snakes. Of all of these, only half a dozen are venomous. With an abundance of snakes throughout the Upstate and Lake Keowee in particular, knowing which are good and which are dangerous, is key to feeling safe when hiking, camping, or simply enjoying the outdoors. Today, we’ll dive deeper into our area’s snakes.

Some snakes, like the Black King snake mentioned above, are actually great to have around you. Not that you’d want one in your home, but many non-venomous snakes in the south east are wonderful backyard friends, keeping voles, mice, and other vermin away from your home and garden. There are several common non-venemous snakes in our region: the Black King, Rat, Racer, Eastern Garter, Corn, and the Brown Snake.  These are the snakes you are most likely to find on a run through your neighborhood, on a common trail, or in your backyard.

The Black King snake is quite striking. This snake has black coloring and distinctive yellow rings. While king snakes can vary widely in their appearance, the Black King is quite easy to distinguish against poisonous snakes in the region. Another black snake is the Black Racer. This is a typical garden snake but it is solid black. They’re typically found near gardens but will also hang out in your landscaping.  They mainly eat smaller animals like birds, other snakes, and lizards. Many Black Racer snakes have a white chin and under belly. While you’ll be easily able to tell they are not a Copperhead, they will sometimes be confused for a Cottonmouth when someone can only see their head.

A few other common snakes you are likely to encounter at some point living in this region are the Easter Garter, Brown, Corn,  and Rat snakes. All of these snakes are similar to the black variety mentioned and eat rodents, insects, and more importantly – other snakes.  But, unlike the black variety, these tend to scare people due to their markings which can resemble Copperheads and other venomous snakes in the region.

How to spot a helper or a “scarer”:

In South Carolina, we’re home to a few venomous snakes. These are most commonly the Copperhead, Cottonmouth, and a few varieties of Rattlesnakes. Knowing what the markings on these animals look like, the shape of their head, and their pupil shape are the best ways to determine if it is a “bad” snake or one of our happy neighborhood pest eaters like the Garter or Rat snake. 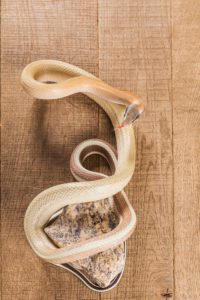 Clemson University’s Home & Garden Information Center has a wonderful page on how to understand the pattern on a Copperhead and how it differs from common non-venomous snakes in the region. Click here to read. They also provide a link to a PDF from the South Carolina Department of Natural Resources of all the 6 venomous snakes in our state. You can download this PDF here.

Did you know that one of the quickest ways to know if you’ve stumbled across a venomous snake in SC is to look at their eyes? We didn’t! The pupils of our venomous snakes all have a “cats eye” – thin, black vertical pupils surrounded by a yellow/green ball. Non-venomous snakes all have round pupils like you & I. The only exception is the coral snake – this snake has round pupils and is one that you want to stay away from! Don’t worry though – of all the poisonous ones, this buddy is the most vibrant and easiest to spot!  Pit vipers (which are 5 of the 6 snakes mentioned) also have triangle shaped heads. Non-venomous ones around us don’t!  In fact, non-venomous common snakes actually know this difference and will tend to flatten their head when confronted to look more like a dangerous snake!

As you know, the best way to handle a snake is to not approach the animal. Stay striking distance away until you can determine if the snake is dangerous. Don’t try to move the animal out of your way.  Of all the dangerous varieties, you’re most likely near Keowee and the Upstate, to see a Cottonmouth (also called a Water Moccasin) while out on a lake, or the Copperhead which is commonly spotted even in suburban areas.  In order to deter a Copperhead, or rattler from making a home in your yard, keep everything tidy – leaves up, shrubs cut back, etc. Water Moccasins should just be left alone to enjoy the lake themselves. 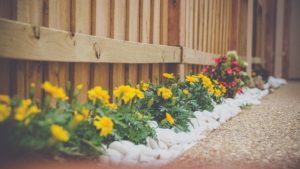 With all the abundance of natural beauty surrounding us here in the Upstate, don’t let a potential encounter with a snake keep you from being outside. Spend the day exploring local waterfalls, lakes, or mountain views on one of the numerous area trails. And if, along your adventure, you encounter a slither friend (or foe), just remember – they’re trying to enjoy a nice spring or summer day too!  🤣