One of the rarest horses in the world is not only native to South Carolina but has a cool history link for the entire United States!

The breed known as the Marsh Tacky is native to the Palmetto State.  The isolated sea islands of South Carolina and Georgia helped to create a fearless and tough horse.  This breed has a similar appearance to the Spanish Mustang, descendant of Spanish horses brought to the Americas over 300 years ago.  The breed is slightly smaller the Spanish Mustang with narrower chests, due to heavier foraging as a wild horse vs tamed breeds. This lighter, lower frame and strong disposition helped them survive the difficult terrain and conditions of the low country and soon they became a prized addition to settlers, Gullah, and Native American farms in the area. 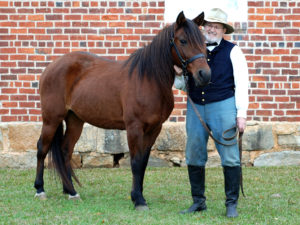 Throughout these many years, the Marsh Tacky has been known to handle most any task, regardless of environmental conditions.  This type of horse is not prone to panic and fairly low maintenance in the care.  Whether they were used for plowing a muddy field or taking children to school, this breed was reliable!

It was upon these sure-footed backs that the soldiers under General Francis “Swamp Fox” Marion defeated the British during the American Revolutionary War.  The British troops had larger European horses that did not do well in the marshes and swampy terrain.  The Marsh Tacky also had greater endurance than the European cousins, allowing the patriots to travel all day without having to stop for care.  The vital role that this special horse played during the American Revolution was outlined a 2010 bill that designated this breed as South Carolina’s heritage horse.

The title is useful in that it helps raise awareness for the Marsh Tacky as there are sadly less than 500 of this horse today.  With the dwindling population, many horse enthusiasts are working to increase the population through carefully planned breeding programs and associations like the Carolina Marsh Tacky Association.  To learn more about the horse, it’s history, and how you can help Marsh Tacky horses continue to thrive, visit their website at http://www.marshtacky.info.