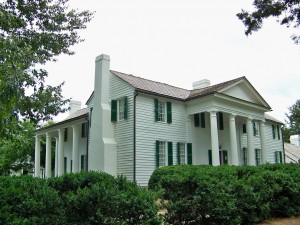 Set upon the grounds of Clemson University is a house steeped in history and tradition. Its large white exterior and antebellum charm are reminiscent of times gone by in an ever-changing landscape of architecture and people.

Walking on the grounds of Fort Hill, you are immediately transported from a college campus to the historic plantation of John C. Calhoun. First purchased by Calhoun’s wife’s family, Fort Hill, known as Clergy Hall at the time, stood in 1803 as the manse for Old Stone Church, which still stands a few miles away. In 1836, upon her mother’s death, Calhoun’s wife Floride inherited Fort Hill and became the sole owner of the house and adjoining 1,341 acres of land in 1850 after Calhoun’s death.

During their marriage, the Calhoun’s had a daughter, Anna, who would go on to marry Clemson University’s namesake, Thomas Green Clemson. A scientist, mining engineer and diplomat, Thomas Clemson was considered the first US secretary of agriculture. He was considered highly educated and had a visionary mindset that led him to serve under four US presidents. Anna, too, was interested in politics and together they inherited and ran Fort Hill from 1866-1888, after the death of Thomas who left his estate and fortune for the “betterment of education in South Carolina”. His land would go on to establish the first agricultural college in South Carolina, Clemson College, which saw an agricultural and military based beginning, turning into what is now known as Clemson University, one of the top public universities in the country.

Fort Hill is open to the public for tours and showcases many artifacts of the Calhoun-Clemson reign of Fort Hill. Visit the link below to schedule a tour today!