The next time you are traveling through Greenville, it is worth the slight detour to see the only remaining covered bridge in South Carolina.  Campbell’s Covered Bridge is a wonderfully preserved piece of history for Upcountry South Carolina.  The bridge was built in 1909 and named for the owner of a nearby grist mill, Lafayette Campbell, who allowed his land to be used during the construction of the bridge.  This type of covered bridge was popular in the mountainous areas as they gave added protection for the crossing in snow and ice.  Built by Charles Irwin Willis, who was an accomplished builder in the northern part of Greenville County in the early twentieth century, this structure is one of the premier examples of a Howe truss covered bridge.  The bridge spans 38 feet long and 12 feet wide and constructed of pine.  The building of this bridge resulted in connecting several of the rural towns and communities which greatly reduced travel time for many in that day.  Campbell’s Covered Bridge is over the peaceful Beaverdam Creek in Greenville county, located off State Road 414 (171 Campbells Covered Bridge Road, Landrum, SC 29356). 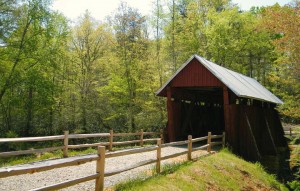