“Run Run as fast as you can. You can’t catch me. I’m the Gingerbread Man!” 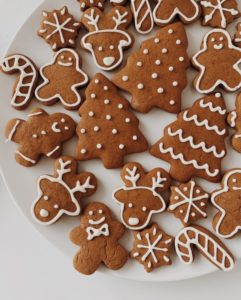 Did you know Gingerbread is an ancient desert? In fact, the first known recipe for gingerbread was dated back to 2400 B.C! The cookies became popular in the 14th century Europe and it is here that the hard cookies started to take shape, literally. At fairs and shops throughout Europe during the middle ages, artisan bakers started cutting the cookies into shapes of animals, Kings and Queens, and even added GOLD leaf to them! Fancy!

Even the Gingerbread Man himself has a lineage that he can trace, although you won’t find it on Ancestry.com.

The first gingerbread man has been credited to Queen Elizabeth I, who was known for her rather elaborate royal dinners.  For her distinguished guests, she had gingerbread figures made in the guests’ likeness and presented as gifts! Yes, she had a royal gingerbread maker on the payroll and wanted to make good use of his creativity.

The fairy tale about a gingerbread man who comes to life has many versions but the most famous version which we still refer to today, has been dated back to an issue of the St. Nicholas Magazine in 1875.  This was a variant of the European runaway pancake story.  Who came up with these ideas? The Gingerbread has been a hit since it’s publication and inspired a Broadway musical of the same name in 1905-1906 and additional books including one from L. Frank Baum, author of The Wizard of Oz (John Dough and the Cherub).

Then how has this person-shaped cookie become associated with Christmas?  Although that reason is not definitive, many attribute it to the cooler weather, as the ginger has a warming and comforting effect on the person eating the sweet.  Perhaps it was due to gingerbread being considered a delicacy and therefore reserved for special occasions.

The following is a quick takeaway video diving into the history of Gingerbread:

Regardless of what traditions you have during this season, we hope you enjoy this time with loved ones (and have delicious cookies, too)!